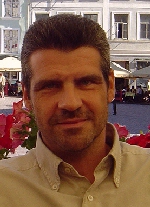 Dr George Leftheriotis is associate professor in Renewable Energy Sources, at the Department of Physics, University of Patras.

He studied Physics at the University of Patras and was awarded the BSc degree in 1987. Having received an EU grant, he carried out postgraduate studies in the field of Wind Energy at Warwick University, UK. He received the MSc degree in Engineering (by research, with distinction) in 1989 with a thesis focused on the use of leading edge vortices produced by slender delta wings as wind power augmenters. In 1992 he received the PhD degree in Engineering  with a thesis concerning the design of wind turbines to operate within the delta wing vortices.

During the period 1995-2009 he has worked as a research fellow at the Energy and Environment Laboratory of Physics Department, University of Patras, taking part in five European research projects (Joule, Energie 4, TMR-LSF) and in more than ten national projects. In 2009 he obtained his present position.

This website uses cookies to improve your experience while you navigate through the website. Out of these, the cookies that are categorized as necessary are stored on your browser as they are essential for the working of basic functionalities of the website. We also use third-party cookies that help us analyze and understand how you use this website. These cookies will be stored in your browser only with your consent. You also have the option to opt-out of these cookies. But opting out of some of these cookies may affect your browsing experience.
Necessary
Advertisement
Analytics
SAVE & ACCEPT
Powered by